Every week, GrabFood.com’s cloud infrastructure serves over >1TB network egress and 175 million requests, which increased our costs. To minimise cloud costs, we had to look at optimising (and reducing) GrabFood.com’s bundle size.

Any reduction in bundle size helps with:

After applying the 7 webpack bundle optimisations, we were able to yield the following improvements:

One of the biggest factors influencing bundle size is dependencies. As mentioned earlier, fewer dependencies mean fewer lines of code to compile, which result in a smaller bundle size. Thus, to optimise GrabFood.com’s bundle size, we had to look into our dependencies.

Jump to Step C: Reducing your Dependencies to see the 7 strategies we used to cut down our bundle size.

Step A: Identify Your Dependencies

In this step, we need to ask ourselves ‘what are our largest dependencies?’. We used the webpack-bundle-analyzer to inspect GrabFood.com’s bundles. This gave us an overview of all our dependencies and we could easily see which bundle assets were the largest.

What to look out for:

I: Large dependencies (fairly obvious, because the box size will be large) 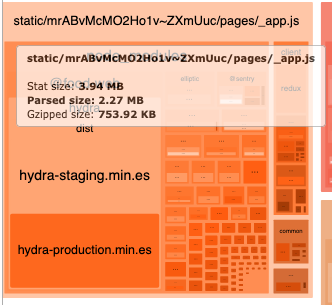 III: Dependencies that look like they don’t belong (e.g. Why is ‘elliptic’ in my frontend bundle?) 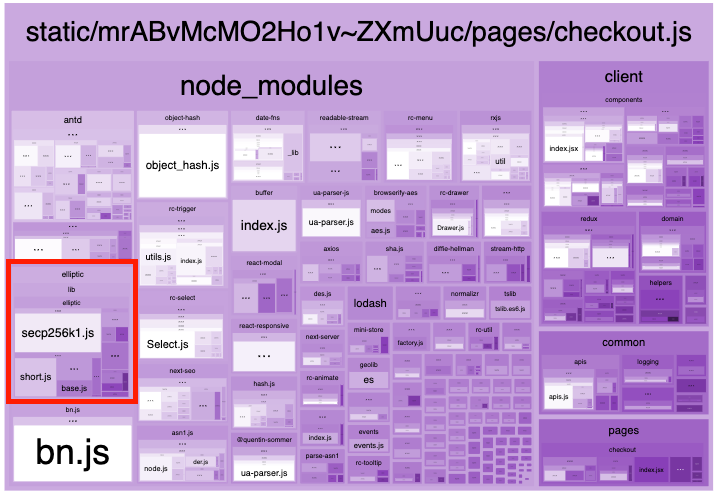 In this step, we are trying to answer this question: “Given a dependency, which files and features are making use of it?”.

There are two broad approaches that can be used to identify how our dependencies are used:

I: Top-down approach: “Where does our project use dependency X?”

II: Bottom-up approach: “How did dependency X get used in my project?”

Our recommendation is to use a mix of both Top-down and Bottom-up approaches to identify and isolate dependencies.

Now that you know what your largest dependencies are and where they are used, the next step is figuring out how you can shrink your dependencies.

Here are 7 strategies that you can use to reduce your dependencies:

Note: These strategies have been listed in ascending order of difficulty - focus on the easy wins first 🙂

Similar to how lazy loading is used to break down large React pages to improve page performance, we can also lazy load libraries that are rarely used, or are not immediately used until prior to certain user actions.

If you see the same dependency appearing in multiple assets, consider unifying these duplicate dependencies under a single entrypoint.

3. Use Libraries that are Exported in ES Modules Format

4. Replace Libraries whose Features are Already Available on the Browser Web API

If it is acceptable to change your technical approach, we can avoid using certain dependencies altogether.

You should not need to use node-related dependencies, unless your application relies on a node dependency directly or indirectly.

We can do a deep-dive into our dependencies to identify possible size optimisations by applying all the aforementioned techniques. If your size optimisation changes get accepted, regardless of whether it’s publicly (e.g. GitHub) or privately hosted (own company library), it’s a win-win for everybody! 🥳

Step D: Verify that You have Modified the Dependencies

But as always, it’s best to be methodical to measure the impact of your changes, and to make sure no features have been broken.

If you can’t remove the dependency:

To summarise, here’s how you can go about this business of reducing your bundle size.

And by using these 7 strategies…

Now armed with this information, may your eyes be keen, your bundles be lean, your sites be fast, and your cloud costs be low! 🚀 ✌️

Special thanks to Han Wu, Melvin Lee, Yanye Li, and Shujuan Cheong for proofreading this article. 🙂