A plethora of interconnected microservices is what powers the Grab’s app. The microservices work behind the scenes to delight millions of our consumers in Southeast Asia. It is a no-brainer that we emphasise on strong testing tools, so our app performs flawlessly to continuously meet our consumers’ needs.

We have a microservices-based architecture, in which microservices are interconnected to numerous other microservices. Each passing day sees teams within Grab updating their microservices, which in turn enhances the overall app. If any of the microservices fail after changes are rolled out, it may lead to the whole app getting into an unstable state or worse. This is a major risk and that’s why we stress on conducting “end-to-end (E2E) testing” as an integral part of our software test life-cycle.

E2E tests are done for all crucial workflows in the app, but not for every detail. For that we have conventional tests such as unit tests, component tests, functional tests, etc. Consider E2E testing as the final approval in the quality assurance of the app.

Writing E2E tests in the microservices world is not a trivial task. We are not testing just a single monolithic application. To test a workflow on the app from a user’s perspective, we need to traverse multiple microservices, which communicate through different protocols such as HTTP/HTTPS and TCP. E2E testing gets even more challenging with the continuous addition of microservices. Over the years, we have grown tremendously with hundreds of microservices working in the background to power our app.

Some major challenges in writing E2E tests for the microservices-based apps are:

Though there are several challenges, we had to find a way to overcome them and test workflows from the beginning to the end in our app.

Our Approach to Overcome Challenges

We knew what our challenges were and what we wanted to achieve from E2E testing, so we started thinking about how to develop a platform for E2E tests. To begin with, we determined that the scope of E2E testing that we’re going to primarily focus on is Grab’s transport domain — the microservices powering the driver and passenger apps.

One approach is to “simulate” user scenarios through a single platform before any new versions of these microservices are released. Ideally, the platform should also have the capabilities to set up the data required for these simulations. For example, ride booking requires data set up such as driver accounts, passenger accounts, location coordinates, geofencing, etc.

We wanted to create a single platform that multiple teams could use to set up their test data and run E2E user-scenario simulations easily. We put ourselves to work on that idea, which resulted in the creation of an internal platform called “Marionette”. It simulates actions performed by Grab’s passenger and driver apps as they are expected to behave in the real world. The objective is to ensure that all standard user workflows are tested before deploying new app versions.

Marionette enables Grabbers (developers and QAs) to run E2E user-scenario simulations without depending on the actual passenger and driver apps. Grabbers can set up data as well as configure data such as drivers, passengers, taxi types, etc to mimic the real-world behaviour.

Let’s look at the overall architecture to understand Marionette better: 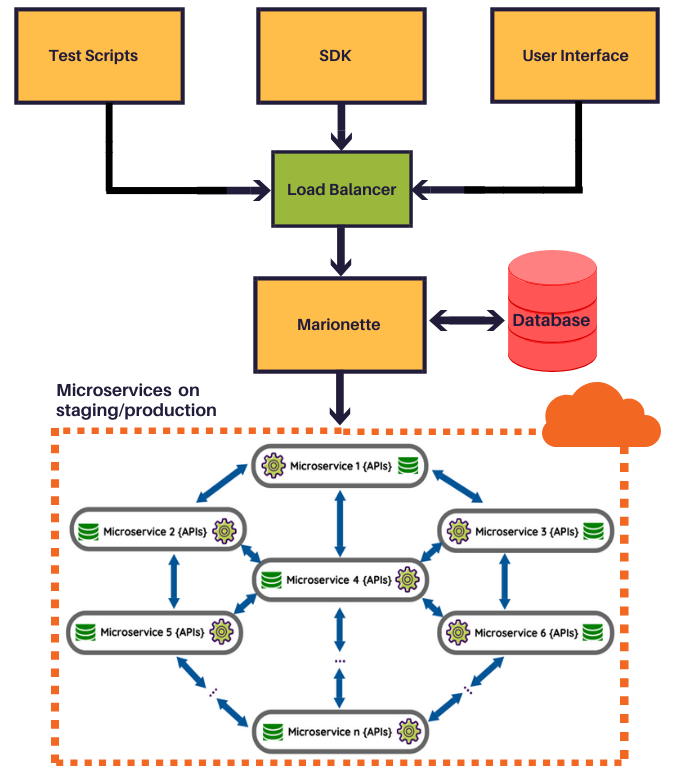 Grabbers can interact with Marionette through three channels: UI, SDK, and through RESTful API endpoints in their test scripts. All requests are routed through a load balancer to the Marionette platform. The Marionette platform in turn talks to the required microservices to create test data and to run the simulations.

With Marionette, Grabbers now have the ability to:

How We Isolated Simulations Among Users

It is important to have independent simulations for each user. Otherwise, simulations don’t yield correct results. This was one of the challenges we faced when we first started running simulations on Marionette.

To resolve this issue, we came up with the idea of “cohorts”. A cohort is a logical group of passengers and drivers who are located in a particular city. Each simulation on Marionette is run using a “cohort” containing the number of drivers and passengers required for that simulation. When a passenger/driver needs to interact with other passengers/drivers (such as for ride bookings), Marionette ensures that the interaction is constrained to resources within the cohort. This ensures that drivers and passengers are not shared in different test cases/simulations, resulting in more consistent test runs.

How to Interact with Marionette

Let’s take a look at how to interact with Marionette starting with its user interface first.

The Marionette UI is designed to provide the same level of granularity as available on the real passenger and driver apps.

Generally, the UI is used in the following scenarios:

The Marionette UI also allows Grabbers to create and set up data. All that needs to be done is to specify the necessary resources such as number of drivers, number of passengers, city to run the simulation, etc. Running E2E simulations involves just the click of a button after data set up. Reports generated at the end of running simulations provide a graphical visualisation of the results. Visual reports save developers’ time, which otherwise is spent on browsing through logs to ascertain errors.

To write the E2E test for this example case, we first define the driver behaviour in a function like this: 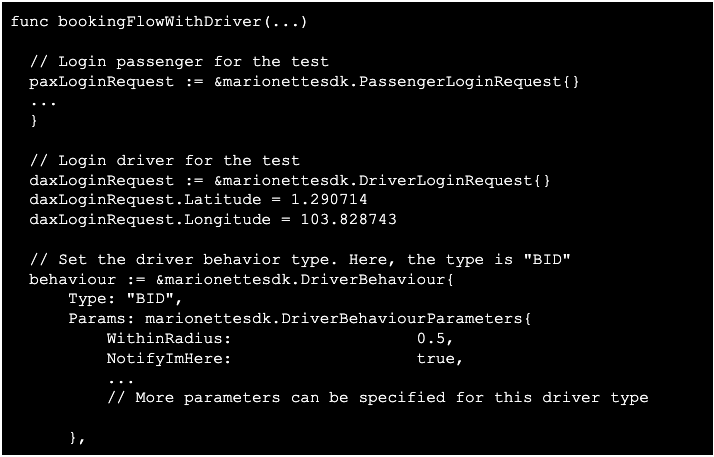 Then, we handle the booking request for the driver like this: 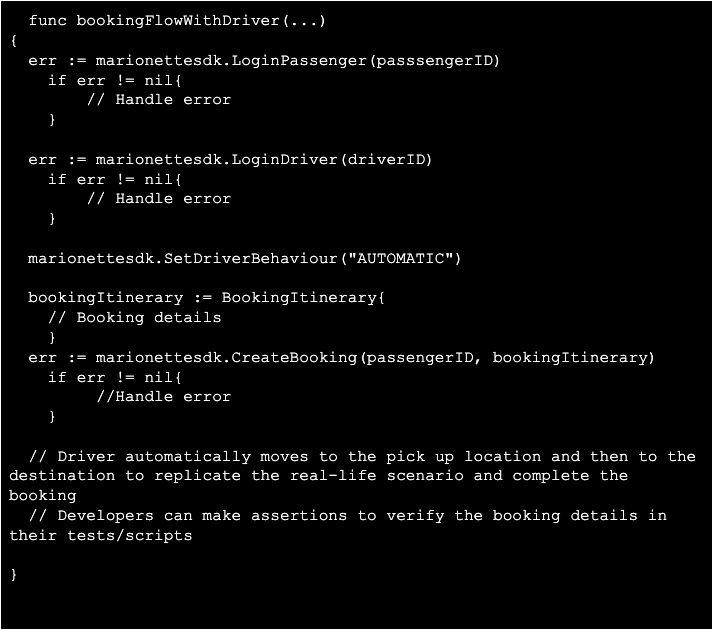 The SDK client makes the handling of passengers, drivers, and bookings very easy as developers don’t need to worry about hitting multiple services and multiple APIs to set up their required driver and passenger actions. Instead, teams can focus on testing their use cases.

To ensure that passengers and drivers are isolated in our test, we need to group them together in a cohort before running the E2E test. 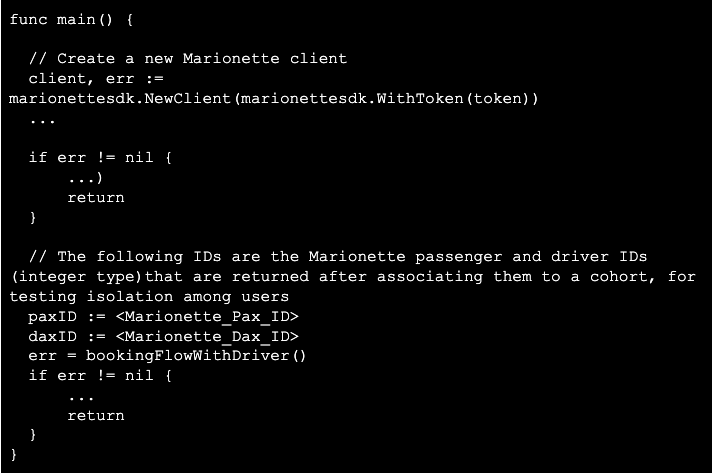 In summary, we have defined the driver’s behaviour, created the booking request, created the SDK client and associated the driver and passenger to a cohort. Now, we just have to trigger the E2E test from our IDE. It’s just that simple and easy!

Developers use these APIs with their preferred programming languages to run simulations. They don’t need to worry about any underlying complexities when using the APIs. For example, developers in Grab have created custom libraries using Marionette APIs in Python, Java, and Bash to run simulations.

Currently, we cover E2E tests for our transport domain (microservices for the passenger and driver apps) through Marionette. The next phase is to expand into a full-fledged platform that can test microservices in other Grab domains such as Food, Payments, and so on. Going forward, we are also looking to further simplify the writing of E2E tests and running them as a part of the CD pipeline for seamless testing before deployment.

We had an idea of creating a simulation platform that can run and facilitate E2E testing of microservices. With Marionette, we have achieved this objective. Marionette has helped us understand how end users use our apps, allowing us to make improvements to our services. Further, Marionette ensures there are no breaking changes and provides additional visibility into potential bugs that might be introduced as a result of any changes to microservices.

If you have any comments or questions about Marionette, please leave a comment below.