At Grab we take pride in creating solutions that impact millions of people in Southeast Asia and as they say, with great power comes great responsibility. As an app with 55 million downloads and 1.2 million drivers, it’s our responsibility to keep our systems up-and-running. Any downtime causes drivers to miss earning and passengers to miss their appointments.

It all started when in early 2017, Grab Identity team realised that given the rate at which our user base was growing, we wouldn’t be able to sustain the load with our existing single Redis node architecture. We used Redis as a cache to store authentication tokens required for secure mobile client to server communication. These tokens are permanently backed up in an underlying MySQL store. The existing Redis instance was filling at crazy speeds and we were growing at a rate at which we had a maximum of 2 months to react before we would start to ‘choke’ i.e. running out of memory to store more data or run operations on the above mentioned Redis node.

It was the moment of truth for us, and forced us to re-evaluate the design and revisit architectural decisions. We had to move away from our existing Redis node and do it fast. We had several options:

From all the mentioned options, it was clear to us that achieving a completely horizontally scalable model where data-sources could be increased on demand with ease, was not possible with the Redis-AWS combination (unless we ended up with a self-hosted Redis on EC2). This is when we started questioning some assumptions:

Did we need horizontal scalability for all the operations?

And we had the answer to this. In a typical authentication system, the scale of writes is significantly lower compared to that of reads. A token that was provisioned in 1 request, would end up being used to authenticate another N requests and our graphs validated this:

It was a clear difference of ~200 times in peak load. So, what if we can achieve horizontal scalability in read cases, and be a bit futuristic in provisioning shards to cover write load?

We had our answer and our winner in the process. AWS ElastiCache did offer support for adding new nodes on demand. These new nodes would act as the read-replica of the master node in the same shard, meaning we can potentially provide horizontal scalability for read operations. To decide on the number of shards, we projected our rate of growth based on what we saw in the previous 6 months, factored in future plans with some additional buffer and decided to go with 3 shards, with 2 replicas for each master; 9 nodes in total.

Now that we had finalised the direction, we had to move and define milestones for ourselves. We decided a few targets for this move:

In a nutshell, we planned to switch the datasource for the 20k QPS system, without any user experience impact, while in a live running mode.

We made our combat plan as comprehensive as possible; outlining each step with maximum precision and caution. Our migration plan comprised of the following six steps.

Step 1: One time data migration from old Redis Node to Redis Cluster This was relatively simple, since the new cluster was not handling live traffic. We just had to make sure that we did not end up impacting performance of the existing node during the migration. SCAN, DUMP and RESTORE did the trick for us, without any clear impact on performance.

Step 2: Application changes to write to new Redis Cluster in asynchronous mode in request path (alongside the old datastore). Shadow writing to the new cluster did not add latency to existing requests and allowed us to validate that all the service to cluster interactions were working as expected. Even in case of failure, the requests will not be impacted.

Step 3: Application to start writing to new Redis Cluster in synchronous mode in request path. Once step 2 was validated, it was time to make the next move. Any failure in cluster calls, would result in the failure of the API call in this step.

Step 4: Application to start reading from Redis Cluster in asynchronous mode and validate values against old Redis Node. This was a validation step to ensure the data being written in the new data source was in sync with the old source. Respective validation results were being tracked as metrics. This validation was being carried out as part of existing read APIs.

Step 5: Move all the Application reads from old Redis Node to new Redis Cluster. This was THE move, where we stopped reading from old data-source. By this point all the APIs were already backed by the redis-cluster.

Step 6: Stop writing to the old Redis Node. This was just a cleanup step, to remove any interactions with the old source. 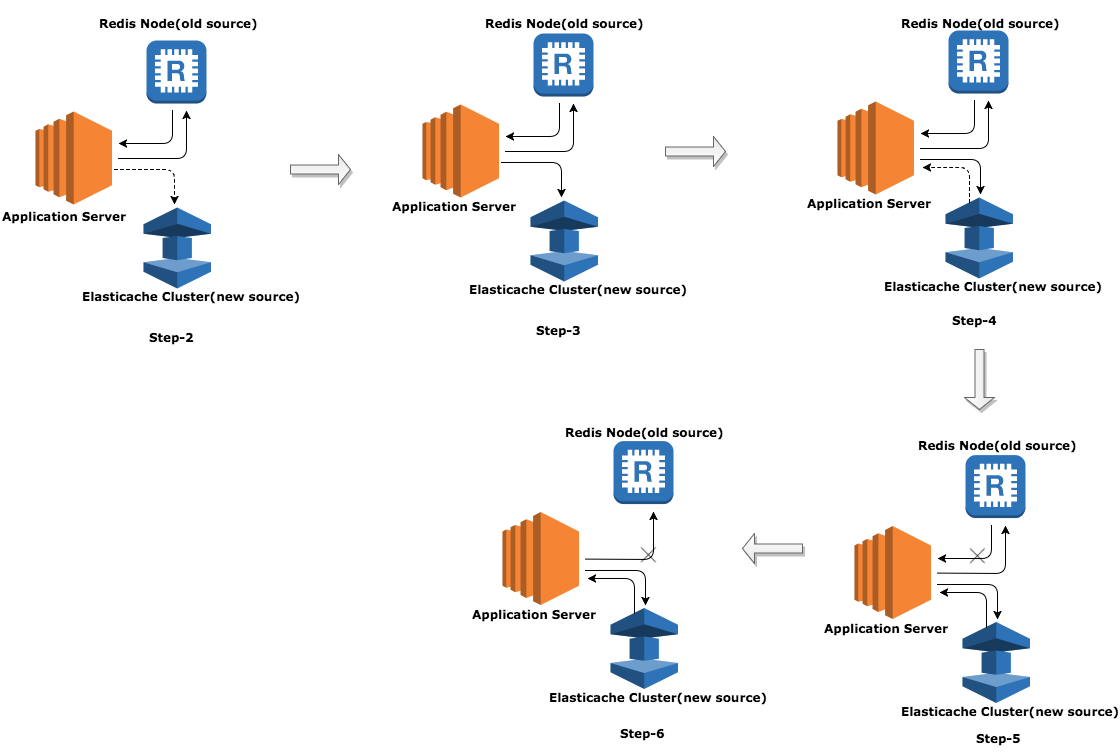 Each step was controlled by configuration flags. In case of unforeseen events or drastic situation, we had levers to move the system back to its original state. Additionally, at each step we added extensive metrics to make sure that we had solid data-points backing our move to confidently move to the next step. We moved smoothly from one step to another and there came a time when we moved to Step 6 and there, we had defused the bomb, timely.

What did we learn from this — in the software world, things are not always tough, problems may not require rocket-science tech all the time. Sometimes, it’s more about well thought-through planning, meticulous execution, coordinated steps, measured and data driven decision making, that’s all you need to have a winning strategy.