To delight our consumers, we’re always looking at new features to launch, or how we can improve existing features. This means we need to develop fast, but also at high quality - which is not an easy balance to strike. To tackle this, we innovated around testing, resulting in Mockers - a tool to expand the scope of local box testing. In local box testing, developers can test their microservices without depending on an integrated test environment. It is an approach to implement Shift Left testing, in which testing is performed earlier in the product life cycle. Early testing makes it easier and less expensive to fix bugs.

Grab employs a microservice architecture with over 250 microservices working together. Think of our application as a clockwork with coordinating gears. Each gear may evolve and change over time, but the overall system continues to work. 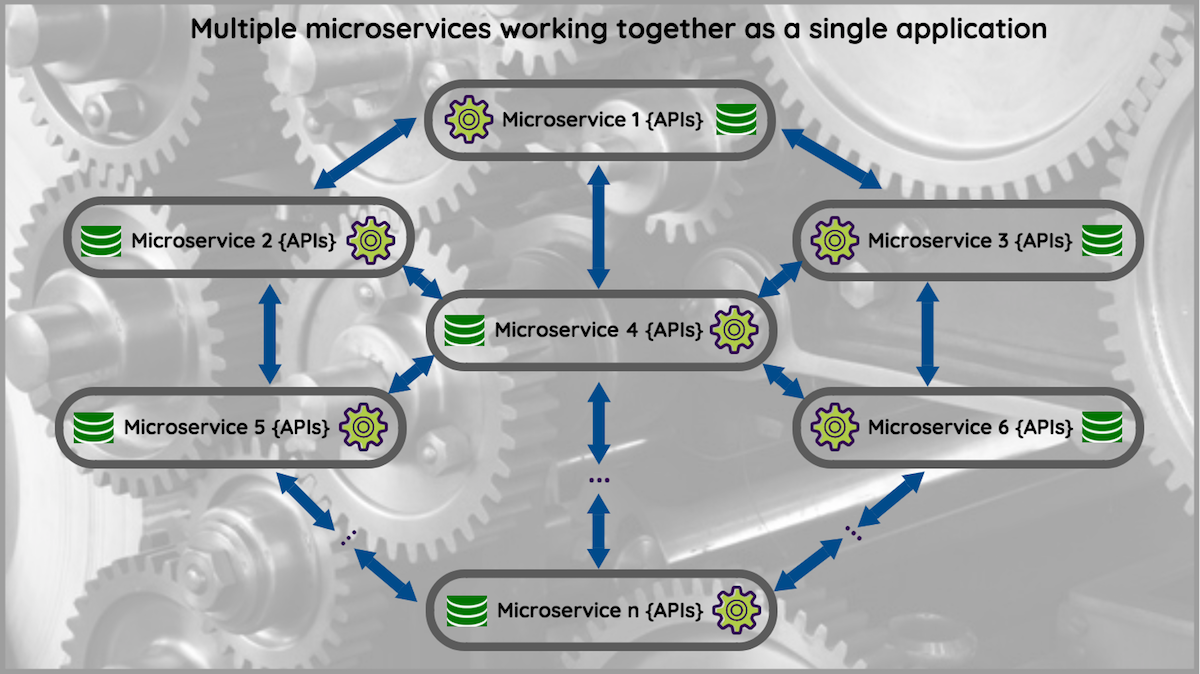 Each microservice runs on its own and communicates with others through lightweight protocols like HTTP and gRPC, and each has its own development life cycle. This architecture allows Grab to quickly scale its applications. It takes less time to implement and deploy a new feature as a microservice.

However the complexity of a microservices architecture makes testing much harder. Here are some common challenges:

Why Conventional Testing is Not Enough

The conventional approach to testing involves heavy unit testing on local boxes, and maintains one or more test environments with all microservices - these are usually called staging environments. Teams run integration, contract, and other tests on the staging environment, making it the primary test area. After comprehensive testing on staging, teams promote the microservice to production. Once it reaches production, very little or no testing is done.

(The testing terminologies used here such as unit tests, integration tests, contract tests, etc are defined in http://www.testingstandards.co.uk/bs_7925-1_online.htm and https://martinfowler.com/bliki/ContractTest.html.) 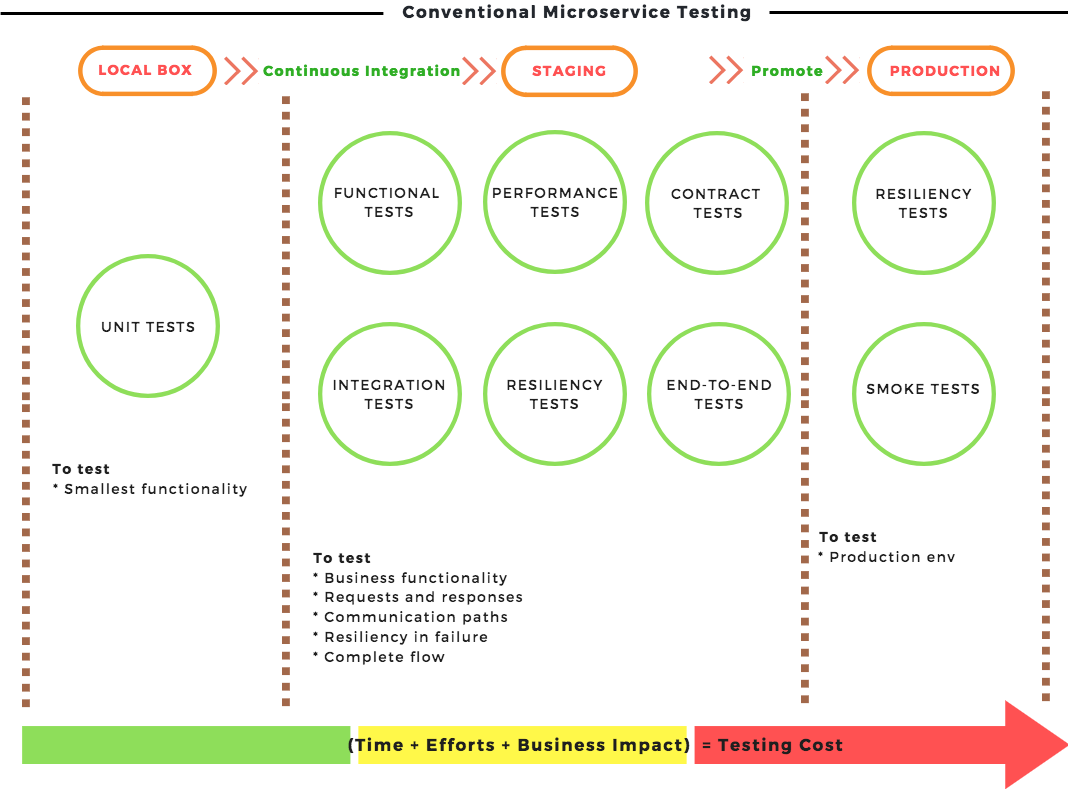 However, testing on a staging environment has its limitations:

Introducing Mockers - Now You can Run Your Tests Locally

Mockers is a Go SDK coupled with a CLI tool for managing a central monorepo of mock servers at Grab.

Mockers simulates a staging environment on developer local boxes. It expands the scope of testing at the local box level, and lets you run functional, resiliency, and contract tests on local boxes or on your CI (Continuous Integration) such as Jenkins. This enables you to catch complex bugs at lower costs as bugs are now found much earlier in the development life cycle. This key advantage makes Mockers a better testing tool than the conventional approach where testing primarily happens on staging, resulting in higher costs.

It lets you create mock servers for mimicking the behaviour of your microservice dependencies, and you can easily set positive or negative expectations in your tests to simulate complex scenarios. 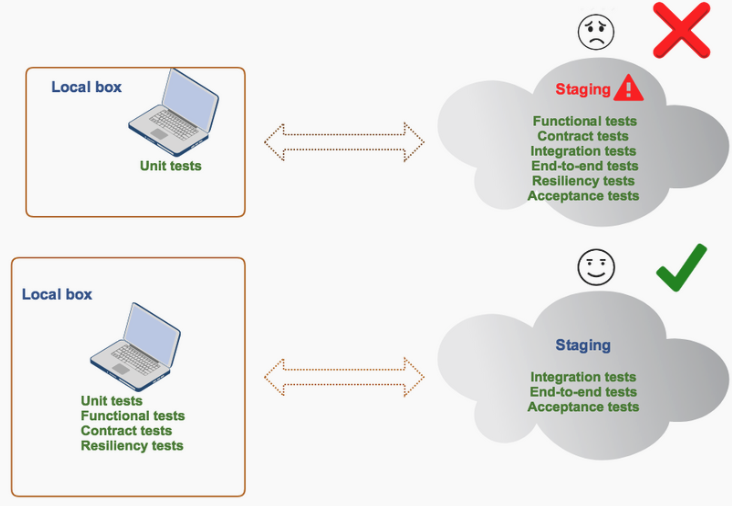 The idea is to have one standard mock server per microservice at Grab, kept up-to-date with the microservice definition. Our monorepo makes any new mock server available to all teams for testing.

Simple CLI commands in Mockers let you generate or update mock servers with the latest microservice definitions, as well as list all available mock servers.

Here is an example for generating a gRPC mock server. The path to the protobuf file, in this case <gitlab.net/…/pb>, is provided in the servergen command. 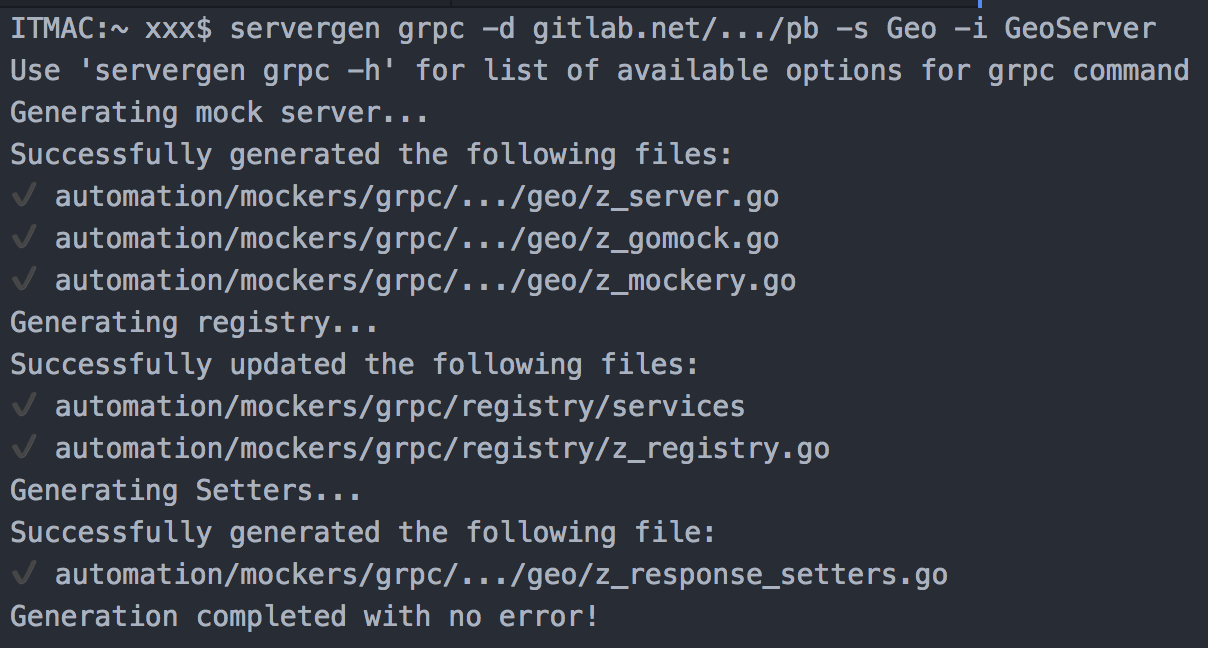 For example, there’s a microservice, booking, that has a mock server. To test your microservice, which depends on booking,you start booking’s mock server and set up test expectations (requests to booking and responses from booking) in your test file. If the mock server is not in sync with the latest changes to booking, you use a simple CLI command to update it, and then run your tests and evaluate the results. 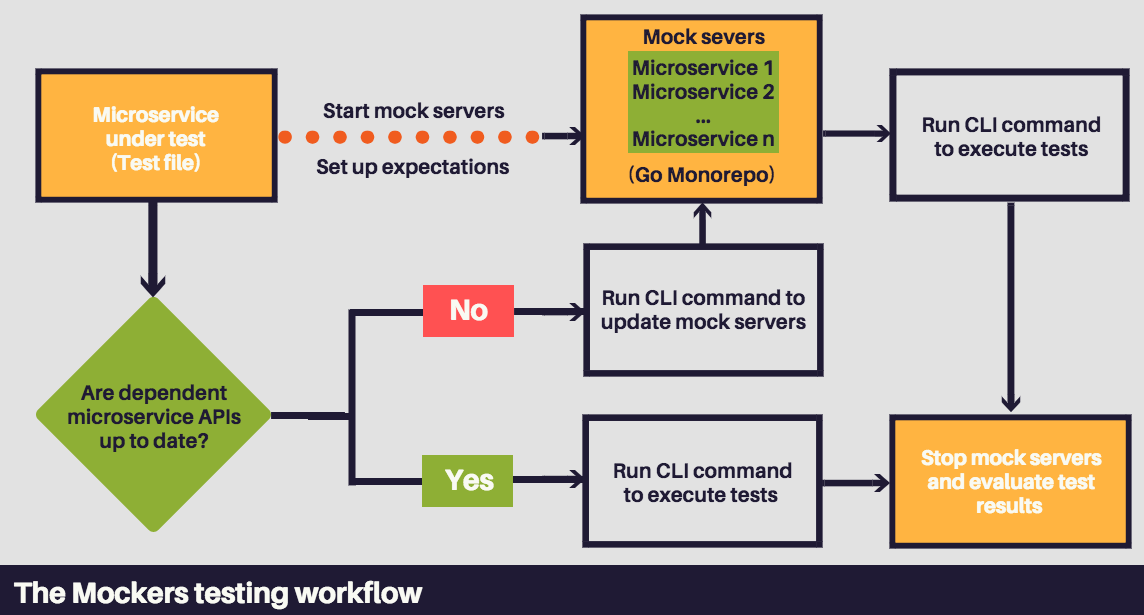 Note that mock servers provide responses to requests from a microservice being tested, but do not process the requests with any internal logic. They just return the specified response for that request.

Here are some of Mockers’ features and their benefits:

Here is an example test. 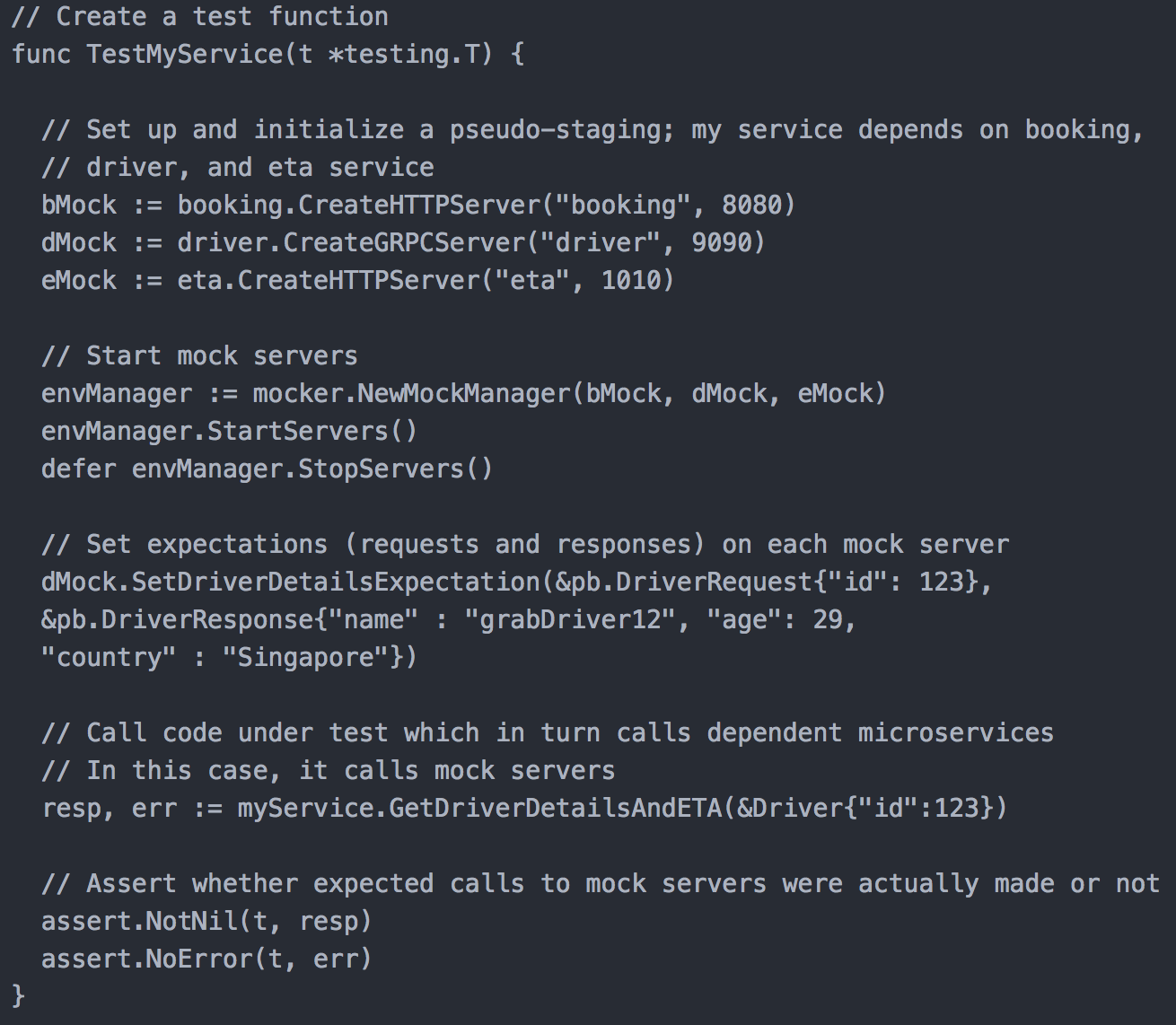 Here is an example of resiliency testing. 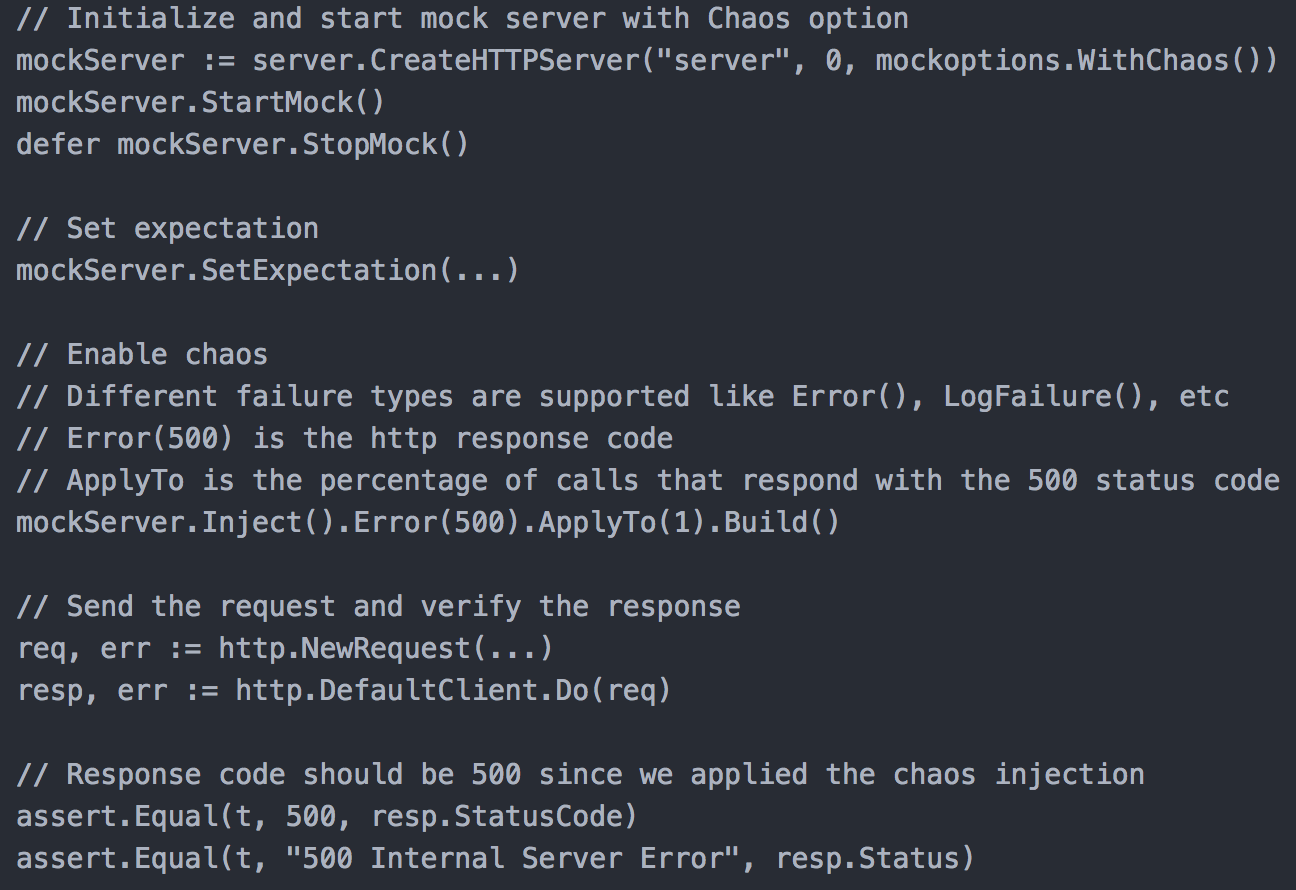 Currently, you need to update the mock server using the CLI. If there is an API contract mismatch after the update, your Mockers based tests start to break. In future, we will add the last updated info for each mock server in the mockers ls CLI command.

We’ve identified Grab’s mobile app as a candidate to benefit from using mock servers. To this end, we are working on building a microservice that acts as a mock server supporting both HTTP and TCP protocols.

With this microservice, mobile developers and test engineers can use our user interface (UI) to set their expected responses to mobile app calls. The mobile app is then pointed to the mock server for sending and receiving responses.

Mockers deals with microservice testing challenges, which helps you meet your consumers’ demands.

Mockers adoption has seen a steady growth among our critical microservices. Since Mockers was launched at Grab, many teams have adopted it to test their microservices. Our adoption rate has increased every month in 2018 so far, and we see no reason why this won’t continue until we run out of non-Mockers using microservices. 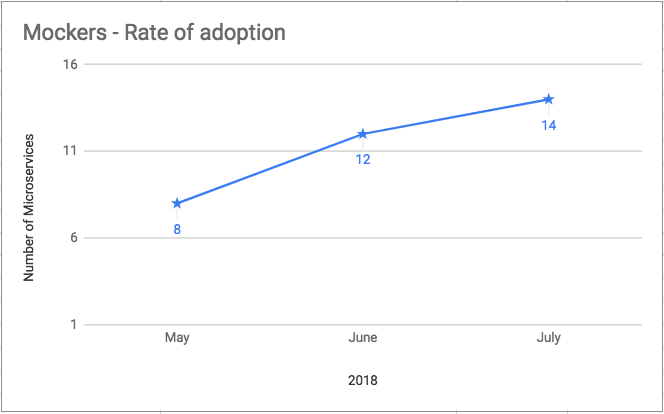 Depth rather than breadth of Mockers usage has increased. In the last few months, teams adopting Mockers wrote a large number of tests that use mock servers. 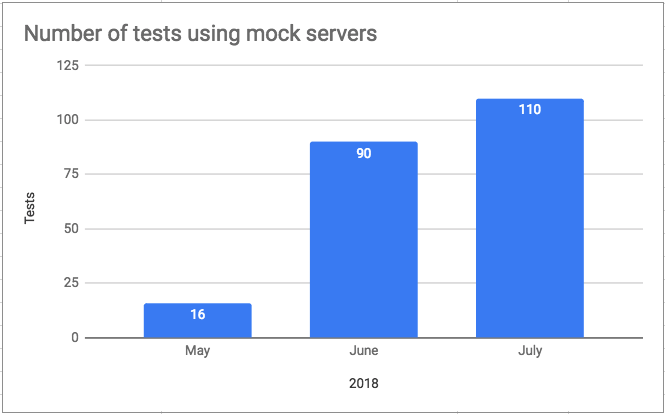 If you have any comments or questions about Mockers, please leave a comment.