A/B testing is an experiment where a random e-commerce platform user is given two versions of a variable: a control group and a treatment group, to discover the optimal version that maximizes conversion. When running A/B testing, you can take the Multi-Armed Bandit optimisation approach to minimise the loss of conversion due to low performance.

A lightweight system that performs basic operations on Kafka Streams, such as aggregation, filtering, and mapping. The proposed solution relies on this framework to pre-process raw events published by mobile apps and backend processes into the proper format that can be fed into the feedback loop.

A system that calculates the goal metrics and optimises the model traffic distribution. It runs a metrics server which pulls the data from Stalker, which is a time series database that stores the processed events in the last one hour. The metrics server invokes a Spark Job periodically to run the SQL queries that computes the pre-defined goal metrics: the Clickthrough Rate, Conversion Rate and so on, provided by users. The output of the job is dumped into an S3 bucket, and is picked up by optimiser runtime. It runs the Multi-Armed Bandit Optimiser to optimise the model traffic distribution based on the latest goal metrics.

The Multi-Armed Bandit Optimiser consists of the following modules:

The goal of the Multi-Armed Bandit Optimisation is to find the optimal Arm that results in the best predefined metrics, and then allocate the maximum traffic to that Arm.

The solution can be illustrated in the following problem. For K Arm, in which the action space A={1,2,…,K}, the Multi-Arm-Bandit Optimiser goal is to solve the one-shot optimisation problem of

The Reward Update module collects a batch of the metrics. It calculates the Success and Failure counts, then updates the Beta distribution of each Arm with the Batched Multi-Armed Bandit algorithm.

The Batched Multi-Armed Bandit algorithm updates the Beta distribution with the batch metrics. The optimisation algorithm can be described in the following method.

The Monte-Carlo Simulation module runs the simulation for N repeated times to find the best Arm over a configurable simulation window. Then, it applies the simulated results as each Arm’s distribution percentage for the next round.

The Adaptive Rollout module rolls out the sampled distribution of each Multi-Armed Bandit Arm, in the form of Multi-Armed Bandit Arm Model ID and distribution, to the experimentation platform’s configuration variable. The resulting variable is then read from the online service. The process repeats as it collects feedback from the Adaptive Rollout metrics’ results in the feedback loop.

In the GrabFood Recommended for You widget, there are several food recommendation models that categorise lists of merchants. The choice of the model is controlled through experiments at rollout, and the results of the experiments are analysed offline. After the analysis, data scientists and product managers rectify the model choice based on the experiment results.

This results in an optimal solution faster. The proposed Multi-Armed Bandit for Recommendation solution workflow is illustrated in the following diagram. 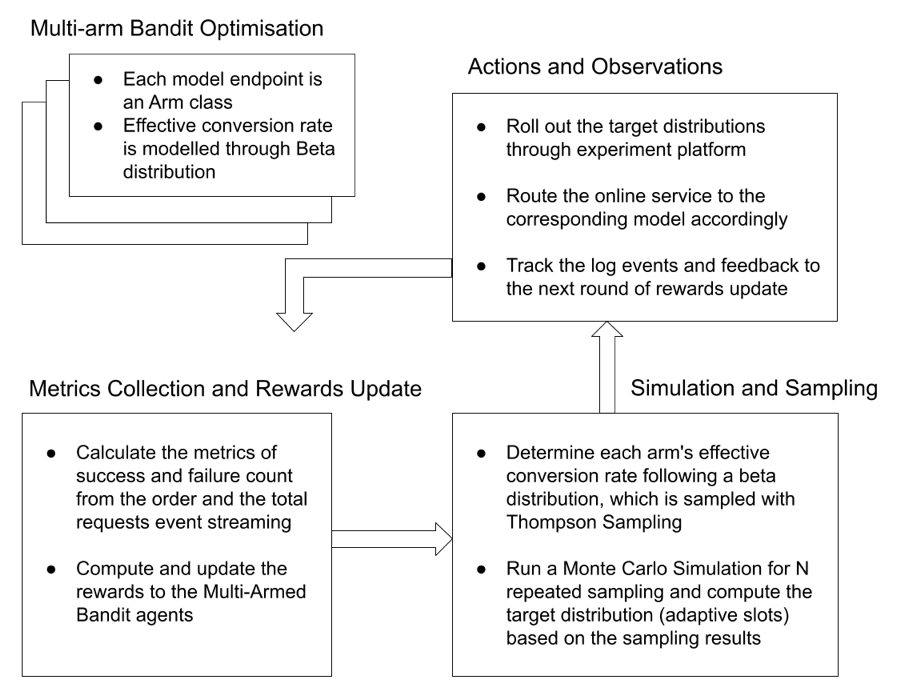 With the Multi-Armed Bandit Optimiser, the Beta distribution is selected to model the Effective Conversion Rate. The use of the mean strategy in the Monte-Carlo Simulation results in a more stable distribution.

The Multi-Armed Bandit Optimiser uses the eater ID as the unique entity, applies a policy and assigns different percentages of eaters to each model, based on computed distribution at the beginning of each loop.

The Multi-Armed Bandit Optimiser first runs model validation to ensure all candidates are suitable for rolling out. If the scheduled MAB job fails, it falls back to a default distribution that is set to 50-50% for each model.