How We Designed the Quotas Microservice to Prevent Resource Abuse

As the business has grown, Grab’s infrastructure has changed from a monolithic service to dozens of microservices. And that number will soon be expressed in hundreds. As our engineering team grows in parallel, having a microservice framework provides benefits such as higher flexibility, productivity, security, and system reliability. Teams define Service Level Agreements (SLA) with their clients, meaning specification of their service’s API interface and its related performance metrics. As long as the SLAs are maintained, individual teams can focus on their services without worrying about breaking other services.

However, migrating to a microservice framework can be tricky - due to the the large number of services and having to communicate between them. Problems that are simple to solve or don’t exist for a monolithic service such as service discovery, security, load balancing, monitoring, and rate limiting are challenging for a microservice based framework. Reliable, scalable, and high performing solutions for common system level issues are essential for microservice success, and there is a Grab-wide initiative to provide those common solutions.

As an important component of the initiative, we wrote a microservice called Quotas, a highly scalable API request rate limiting solution to mitigate the problems of service abuse and cascading service failures. In this article, we discuss the challenges Quotas addresses, how we designed it, and the end results.

What Quotas Try to Address

Rate limiting can be enforced locally or globally. Local rate limiting means an instance accumulates API request information and makes decisions locally, with no coordination required. For example, a local rate limiting strategy can specify that each service instance can serve up to 1000 requests per second for an API, and the service instance will keep a local time-aware request counter. Once the number of received requests exceeds the threshold, it will reject new requests immediately until the next time bucket with available quota. Global rate limiting means multiple instances share the same enforcement policy. With global rate limiting, regardless of the service instance a client calls, it will be subjected to the same global API quota. Global rate limiting ensures there is a global view and it is preferred in many scenarios. In a cloud context, with auto scaling policy setup, the number of instances for a service can increase significantly during peak traffic hours. If only local rate limiting is enforced, the accumulative effect can still put great pressure on critical resources such as databases, network, or downstream services and the cumulative effects can cause service failures.

However, to support global rate limiting in a distributed environment is not easy, and it becomes even more challenging when the number of services and instances increases. To support a global view, Quotas needs to know how many requests a client service A (i.e., service A is a client of Quotas) is getting now on an endpoint comparing to the defined thresholds. If the number of requests is already over the thresholds, Quotas service should help to block a new request before service A executes its main logic. By doing that, Quotas service helps service A protect resources such as CPU, memory, database, network, and its downstream services, etc. To track the global request counts on service endpoints, a centralised data store such as Redis or Dynamo is generally used for the aggregation and decision making. In addition, decision latency and scalability become major concerns if each request needs to make a call to the rate limiting service (i.e., Quotas) to decide if the request should be throttled. And if that is the case, the rate limiting service will be on the critical path of every request and it will be a major concern for services. That is the scenario we absolutely wanted to avoid when designing Quotas service.

Quotas ensures Grab internal services can guarantee their service level agreement (SLA) by throttling “excessive” API requests made to them, thereby avoiding cascading failures . By rejecting these calls early through throttling, services can be protected from depleting critical resources such as databases, computation resources, etc.

The two main goals for Quotas are:

We followed these design guidelines:

Figure 1 is a high-level system diagram for Quotas’ client and server side interactions. Kafka sits at the core of the system design. Kafka is an open-source distributed streaming platform under the Apache license and it’s widely adopted by the industry (https://kafka.apache.org/intro). Kafka is used in Quotas system design for the following purposes: 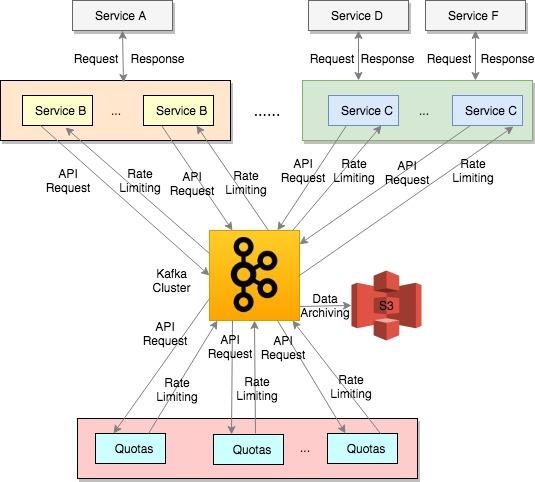 The details of Quotas client side logic is shown in Figure 2 using service B as an example. As it shows, when a request comes in (e.g., from service A), service B will perform the following logic: 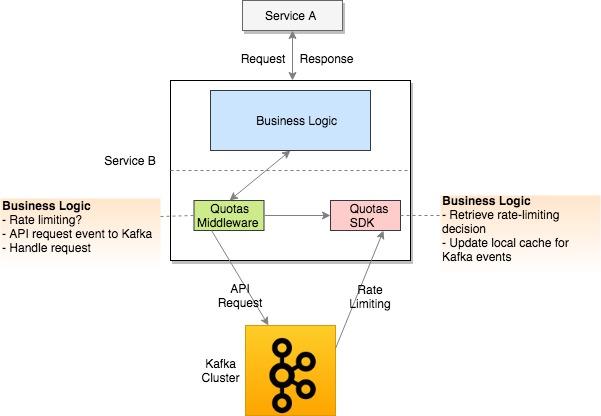 Figure 3 shows the details of Quotas server side logic. It performs the following business logic:

In addition, an admin UI is available for service owners to update thresholds and the changes are picked up immediately for the upcoming rate-limiting decisions. 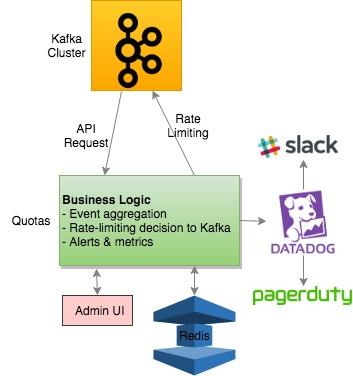 On the client service side (service B in the above diagrams), the Quotas client SDK is initialised when service B instance is initialised. The Quotas client SDK is a wrapper that consumes Kafka rate-limiting events and writes/reads the in-memory cache. It exposes a single API to check the rate-limiting decisions on a client with a given API method. Also, service B is hooked up with Quotas middleware to intercept API requests. Internally, it calls the Quotas client SDK API to determine if it should allow/reject the requests before the actual business logic. Currently, Quotas middleware supports both gRPC and REST protocols.

Quotas provides throttling capabilities based on the sliding window algorithm on the 1-second and 5-second levels. To support extremely high TPS demands, most of Quotas intermediate operations are designed to be done asynchronously. Internal benchmarks show the delay for enforcing a rate-limiting decision is up to 200 milliseconds. By combining 1-second and 5-second level settings, client services can more effectively throttle requests.

During system implementation, we find that if Quotas instances make a call to the Redis cluster every time it receives an event from the Kafka API usage stream, the Redis cluster will quickly become a bottleneck due to the amount of calculations. By aggregating API usage stats locally in-memory and calling Redis instances periodically (i.e., every 50 ms), we can significantly reduce Redis usage and still keep the overall decision latency at a relatively low level. In addition, we designed the hash keys in a way to make sure requests are evenly distributed across Redis instances.

We did multiple rounds of load tests, both before and after launching Quotas, to evaluate its performance and find potential scaling bottlenecks. After the optimisation efforts, Quotas now gracefully handles 200k peak production TPS. More importantly, critical system resource usage for Quotas’ application server, Redis and Kafka are still at a relatively low level, suggesting that Quotas can support much higher TPS before the need to scale up.

Figures 4 & 5 show a typical day’s CPU usage for the Quotas application server and Redis Cache respectively. With 200k peak TPS, Quotas handles the load with peak application server CPU usage at about 20% and Redis CPU usage of 15%. Due to the nature of Quotas data usage, most of the data stored in Redis cache is time sensitive and stored with time-to-live (TTL) values.

However, because of how Redis expires keys (https://redis.io/commands/expire) and the amount of time-sensitive data Quotas stores in Redis, we have implemented a proprietary cron job to actively garbage collect expired Redis keys. By running the cron job every 15 minutes, Quotas keeps the Redis memory usage at a low level. 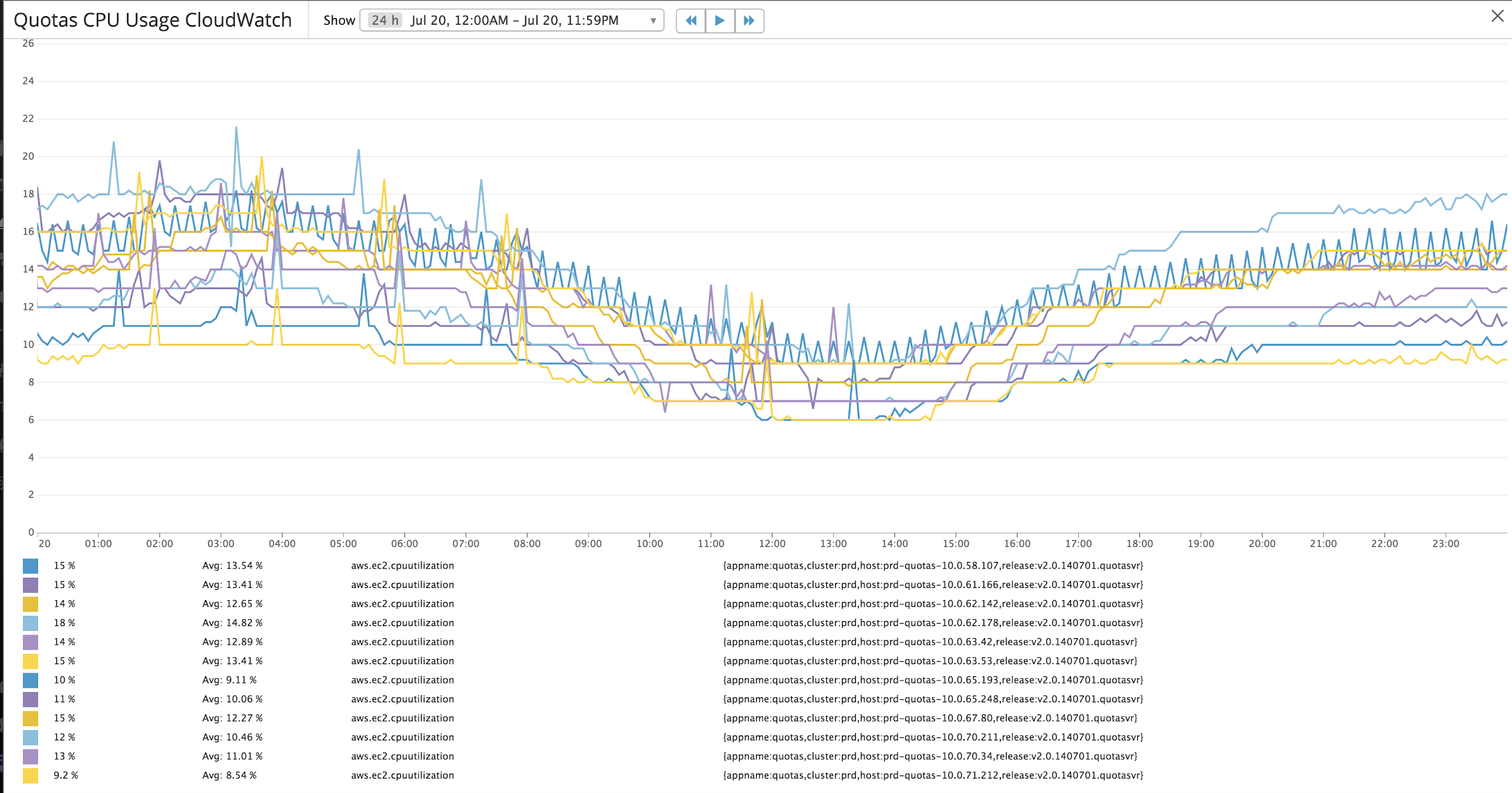 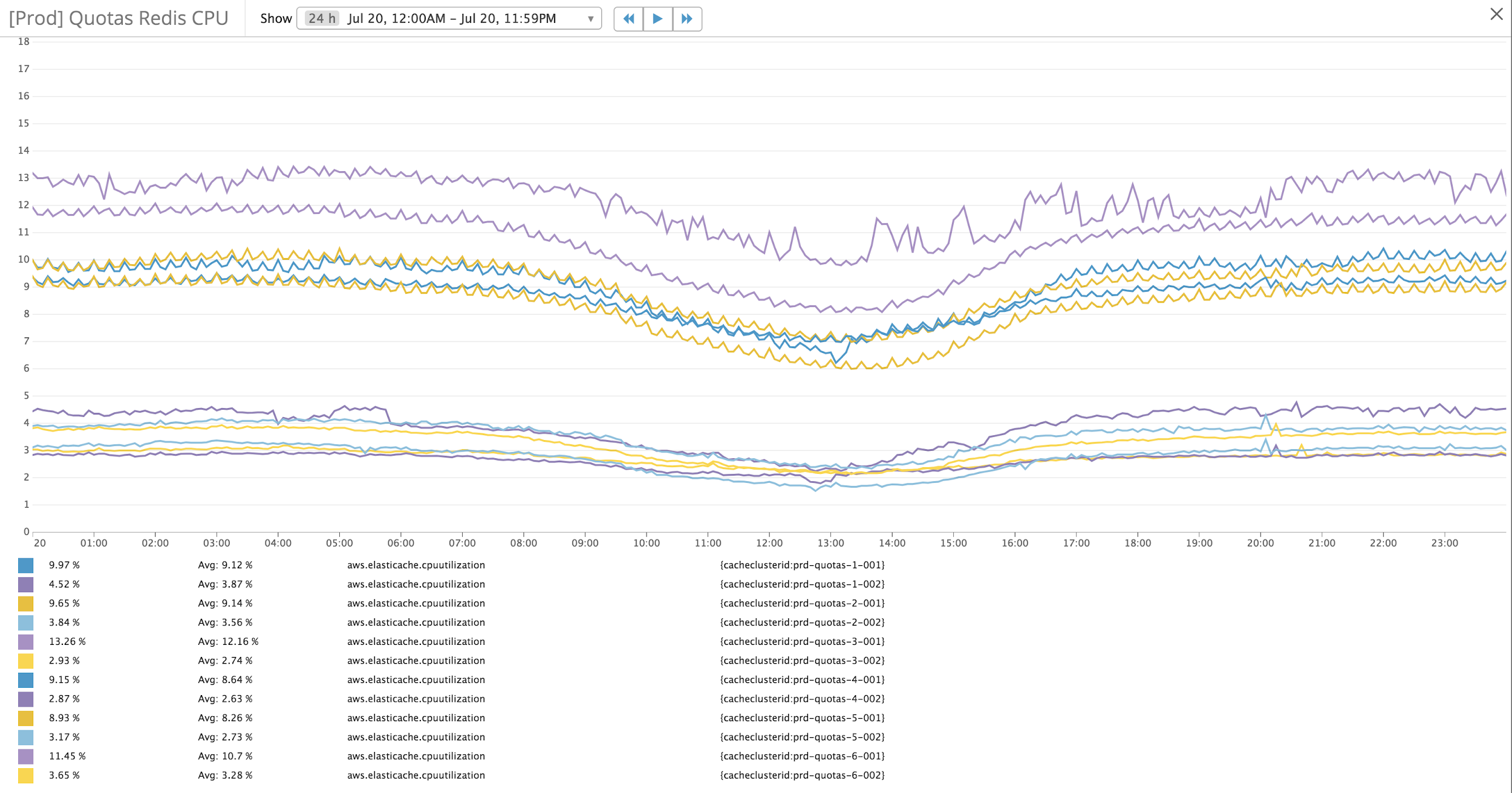 We have conducted load tests to identify the potential issues for scaling Quotas. The tests have shown that we can horizontally scale Quotas to support extremely high TPS using only configuration changes:

With the above design and implementations, all the critical Quotas components can be easily scaled and extended when a bottleneck occurs either at Kafka, application server, or Redis levels.

Quotas is currently used by more than a dozen internal Grab services, and soon all Grab internal services will use it.