It wasn’t too long ago that Grab formed a new team, GrabPay, to improve the cashless experience in Southeast Asia and to venture into the promising mobile payments arena. To support the work, Grab also decided to open a new R&D center in Bangalore.

It was an exciting journey for our team from the very beginning, as it gave us the opportunity to experiment with new cutting edge technologies. Our first release was the GrabPay Merchant App, the first all React Native Grab app. Its success gave us the confidence to use React Native to optimise the Grab Passenger app.

React Native is an open source mobile application framework. It lets developers use React (a JavaScript library for building user interfaces) with native platform capabilities. Its two big advantages are:

This post describes our work on developing React Native components for Grab apps (specifically the Grab Passenger app), the challenges faced during implementation, our learnings from other internal React Native projects, and our future roadmap.

Before embarking on our work with React Native, these were the goals we set out. We wanted to:

Many Grab teams located across Southeast Asia and in the United States support the app platform. It was hard to convince all of them to add React Native as a project dependency and write new feature code with React Native. In particular, having React Native dependency significantly increases a project’s binary’s size, but the initial cost was worth it. We now have only a few modules, all written in React Native:

We have a single codebase for both iOS and Android apps, which means that the modules take half the maintenance resources. Debugging is faster with React Native’s hot reloading. And it’s much easier and faster to implement one of our modules in another app, such as the Grab driver app.

Invoking a module written in React Native from a native module (written in a standard computer language such as Swift or Kotlin) should follow certain guidelines. Once all Grab’s tech families reached a consensus on solutions to these problems, we started making our bridges and doing the groundwork to use React Native.

On the native side, we used the Grablet architecture to add our React Native modules. Grablet gave us a wonderful opportunity to scale our Grab platform so it could be used by any tech family to plug and play their module. And the module could be in any of  Native, React Native, Flutter, or Web.

We had some internal proof of concept projects for determining React Native’s performance on different devices, as discussed here. Many teams helped us make an extensive set of JS bridges for React Native in Android and iOS. Oleksandr Prokofiev wrote this bridge creation example:

The GrabPay merchant app gave us a good foundation for React Native in terms of:

We used this knowledge to build the Transaction History and GrabPay Digital Marketplace components inside the Grab passenger app with React Native.

We selected particularly useful components from the Merchant app codebase such as GPText, GPTextInput, GPErrorView, and GPActivityIndicator. We expanded that selection to a common (internal) component library of approximately 20 stateless and stateful components.

We used to make API calls using axios (now deprecated). We now make calls from the Native side using bridges that return a promise and make API calls using an existing framework. This helped us remove the dependency for getting an access token from Native-Android or Native-iOS to make the calls. Also it helped us optimise the API requests, as suggested by Parashuram from Facebook’s React Native team.

Redux is an extremely lightweight predictable state container that behaves consistently in every environment. We use Redux with React Native to manage its state.

For in-app navigation, we use react-navigation. It is very flexible in adapting to both the Android and iOS navigation and gesture recognition styles.

This is the Android version of the app.

And this is the iOS version:

The UIs for the iOS and Android versions are identical, the code are identical too. A single codebase lets us debug faster, deliver quicker, and maintain smaller.

We launched BillPay first in Indonesia, then in Vietnam and Malaysia. So far, it’s been a very stable product with little to no downtime.

Transaction History started in Singapore and is now rolling out in other countries. 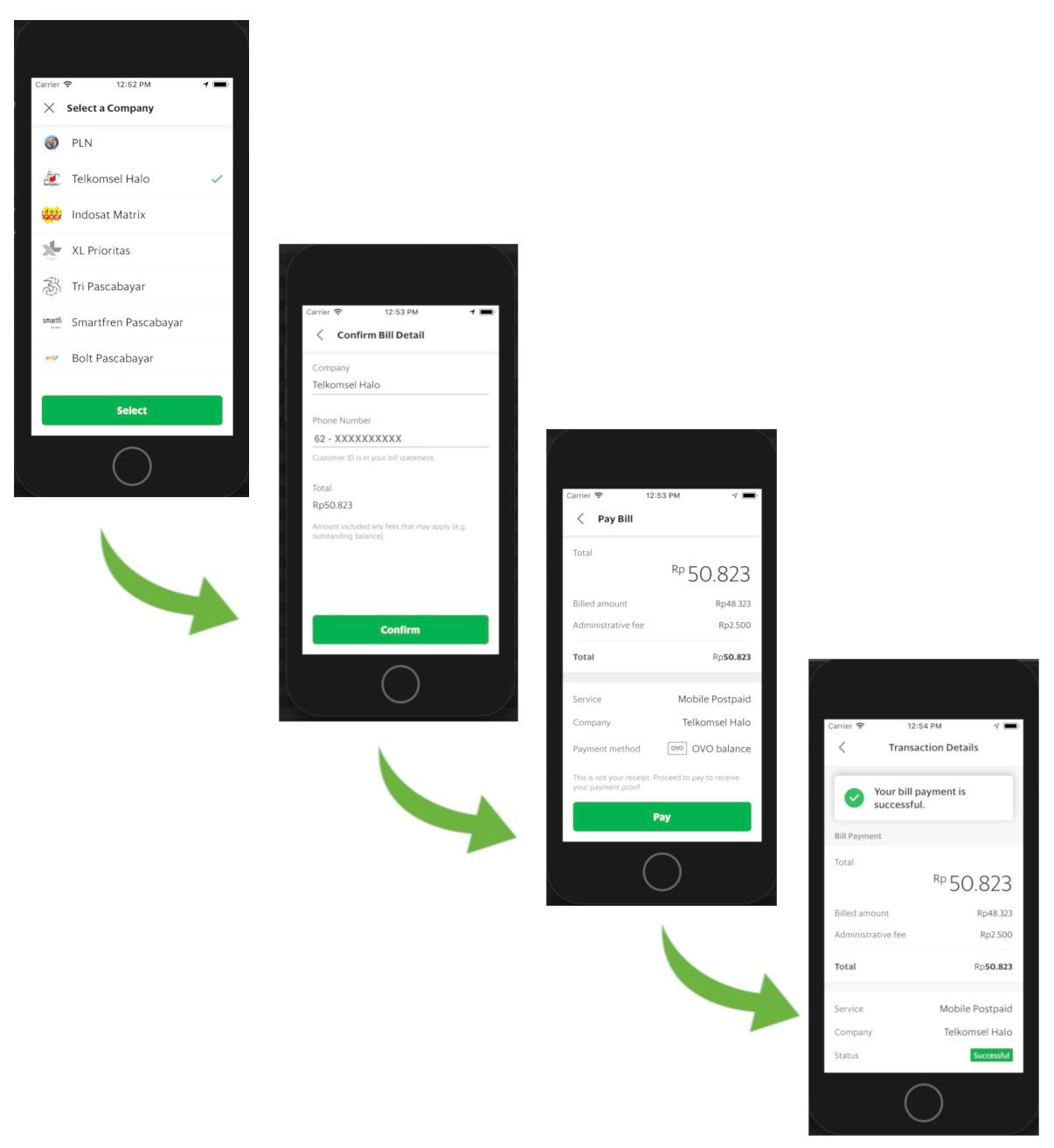 The above shows BillPay’s flow.

Our React Native version has kept the same experience as our Native developed app and helps users pay their bills seamlessly and hassle free.

We are moving our code to Typescript to reduce compile-time bugs and clean up our code. In addition to reducing native dependencies, we will refactor modules as needed. We will also have 100% unit test code coverage. But most importantly, we plan to open source our component library as soon as we meet our milestones around improved stability.