Enabling the millions and millions of transactions and connections that take place every day on our platform requires data-driven decision making. And these decisions need to be made based on real-time data. For example, an experiment might inadvertently cause a significant increase of waiting time for riders.

Without the right tools and setup, we might only know the reason for this longer waiting time much later. And that would negatively impact our driver-partners’ livelihoods and our consumers’ Grab experience.

To overcome the challenge of retrieving information from large amounts of data, our first step was to adopt the open-source Facebook’s Presto, that makes it possible to query petabytes with plain SQL. However, given our many teams, tools, and data sources, we also needed a way to reliably ingest and disperse data at scale throughout our platform.

To cope with our data’s scale and velocity (how fast data is coming in), we built two major systems:

In this article, we focus on TalariaDB, a distributed, highly available, and low latency time-series database that stores real-time data. For example, logs, metrics, and click streams generated by mobile apps and backend services that use Grab’s Experimentation Platform SDK. It “stalks” the real-time data feed and only keeps the last one hour of data.

TalariaDB addresses our need to query at least 2-3 terabytes of data per hour with predictable low query latency and low cost. Most importantly, it plays very nicely with the different tools’ ecosystems and lets us query data using SQL.

The figure below shows how often a particular event happened within the last hour. The query scans through almost 4 million rows and executes in about 1 second.

TalariaDB attempts to solve a specific business problem by unifying cold and hot storage data models. This reduces overall latency, and lets us build a set of simple services that queries and processes data. TalariaDB does not attempt to be a general-purpose database. Simplicity was a primary design goal. We also set the following functional and non-functional requirements.

Where TalariaDB Sits in Our Data Pipeline

The figure below shows where TalariaDB fits in our event ingestion data pipeline’s architecture.

To help you understand this schema, let’s walk through what happens to a single event published from mobile app or a backend service.

First, using the Track() function in our Golang, Android or iOS SDKs, an engineer tracks a metric as follows:

Now, let’s look at TalariaDB and its main components.

One of TalariaDB’s goals is simplicity. The system itself is not responsible for data transformation and data re-partitioning but only ingests and serves data to Presto.

To make sure TalariaDB scales to millions of events per second, it needs to leverage batching. A single event in TalariaDB is not stored as a single row. Instead, we store a pre-partitioned batch of events in a binary, columnar format. Spark streaming takes care of partitioning by event name (metric name) before writing to S3, making our design more streamlined and efficient.

You can see from the schema above, that the system really does only a few things:

We experimented with several different storage backends, and Badger key-value store ended up winning our hearts. It’s an efficient and persistent log structured merge (LSM) tree based key-value store, purely written in Go. It is based upon the WiscKey paper from USENIX FAST 2016. This design is highly SSD-optimised and separates keys from values to minimise I/O amplification. It leverages both the sequential and the random performance of SSDs.

As mentioned, a single event in TalariaDB is not stored as a single row, but as a pre-partitioned batch of events in binary, columnar format. This achieves fast ingestion and fast retrieval. As data will be aligned on disk, only that column needs to be selected and sent to Presto. The illustration in the next section shows the difference. That being said, it is inefficient to store large amounts of data in a single column. For fast iteration, TalariaDB stores millions of individual columnar values (smaller batches) and exposes a combined “index” of metric name and time.

The query pattern we serve is key to understand why we do this. We need to answer questions such as:

These use cases can be served with various trickery using a row based storage, but they require fairly complex and non-standard access patterns. We want to support anyone with an SQL client and SQL basic knowledge.

TalariaDB combines a log-structured merge tree (LSMT) and columnar values to provide fast iteration and retrieval of an individual event type within a given time window. The keys are lexicographically ordered. When a query comes, TalariaDB essentially seeks to the first key for that metric and stops iterating when either it finds the next metric or reaches the time bound. The diagram below shows how the query is processed. 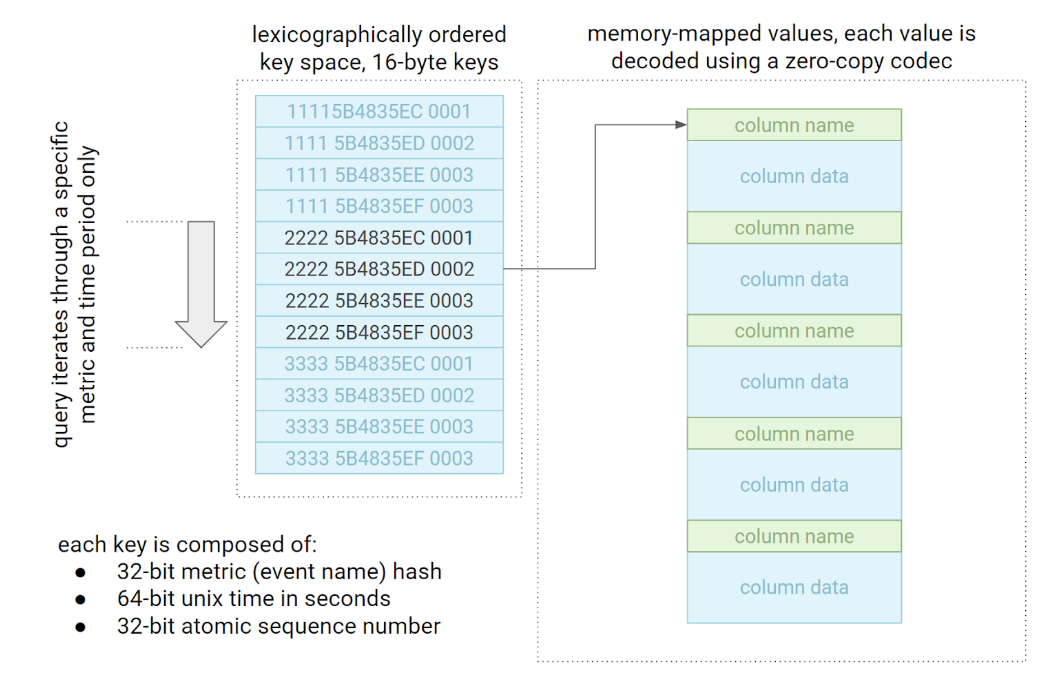 During the implementation, we had to reduce memory allocations and memory copies on read, which led us to implementing a zero-copy decoder. In other words, when a memory-mapped value is decoded, no data is copied around and we simply send it to PrestoDB as quickly and efficiently as possible.

What Presto essentially does is query one of the TalariaDB nodes and requests “data splits”. TalariaDB replies with a list of machines containing the query’s data. In fact, it simply maintains a membership list of all of the nodes (using the reliable Gossip protocol) and returns to Presto a list of all the machines in the cluster. We solve the bootstrapping problem by simply registering the full membership list at a random period in Route53.

Next, Presto hits every TalariaDB instance in parallel for data retrieval. Interestingly enough, by adding a new machine in the TalariaDB cluster we gain data capacity and reduce query latency at the same time. This is provided the Presto cluster has an equal or larger amount of executors to process the data. 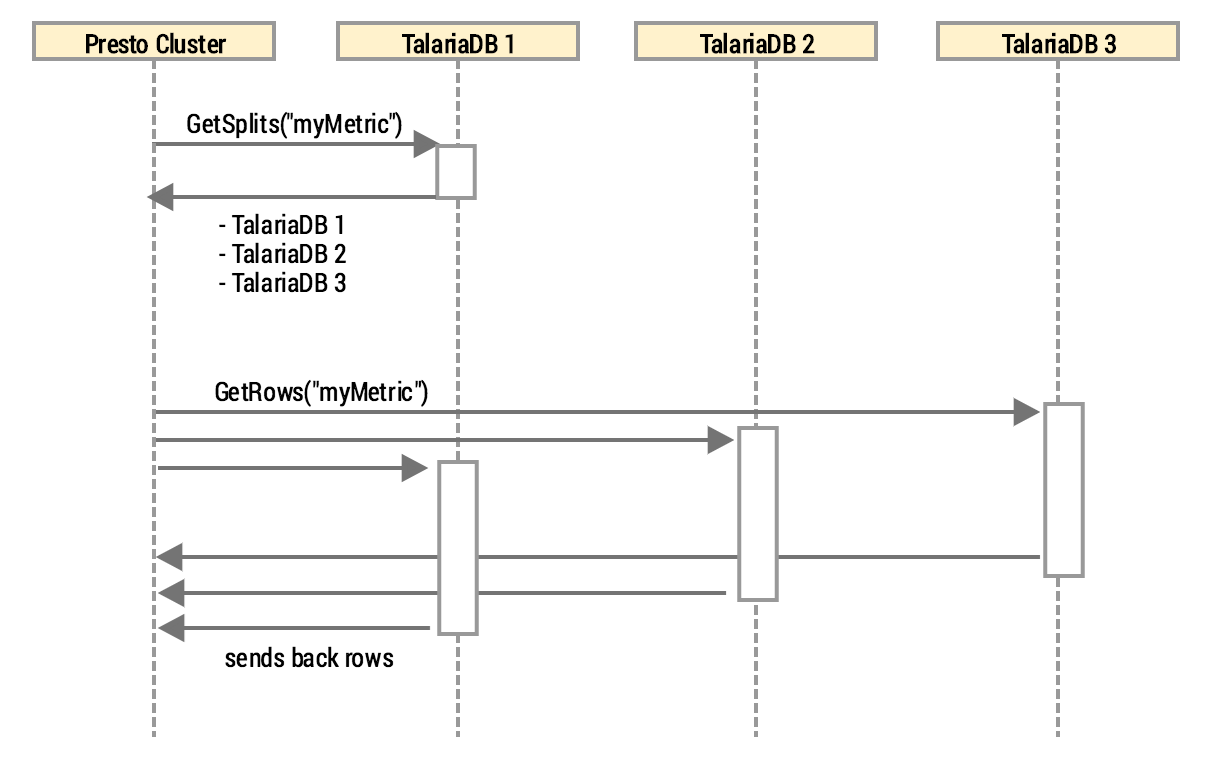 While scaling databases is not a trivial task, by sacrificing some of the requirements (such as strong consistency as per CAP), TalariaDB can scale horizontally by simply adding more hardware servers.

TalariaDB is not only highly available but also tolerant to network partitions. If a node goes down, data residing on the node becomes unavailable but new data will still be ingested and presented. We would much rather serve our consumers some data than no data at all. Going forward, we plan to transition the entire system to a Kubernetes StatefulSet integration. This lets us auto-heal the TalariaDB cluster without data loss, as Kubernetes manages the data volumes.

We do upscaling by adding a new machine to the cluster. It automatically joins the cluster by starting gossiping with one of the nodes (discovery is done using a DNS record, Route53 in our case). Once the instance joins the cluster, it starts polling from a queue the files it has to ingest.

Downscaling must be graceful, given we currently don’t replicate data. However, we can exploit that TalariaDB only stores data for the trailing time period. A graceful downscaling might be implemented by simply stopping ingesting new data but still serving data until everything the node holds is expired and storage is cleared. This is similar to how EMR deals with downscaling.

We have been running TalariaDB in production for a few months. Together with some major improvements in our data pipeline, we have built a global real-time feed from our mobile applications for our analysts, data scientists, and mobile engineers by helping them monitor and analyse behaviour and diagnose issues.

We achieved our initial goal of fast SQL queries while ingesting several terabytes of data per hour on our cluster. A query of a single metric typically takes a few seconds, even when returning several million rows. Moreover, we’ve also achieved one minute of end-to-end latency: when we track an event on the mobile app, it can be retrieved from TalariaDB within one minute of its happening.